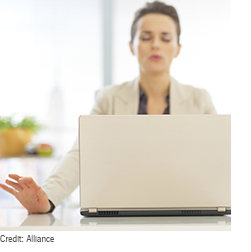 Ever notice how your energy can fail at the most inopportune times? Your report to your boss is due tomorrow and you just can’t concentrate. Your kids want to play catch but you can hardly get off the couch.

For many of us, the main cause of mental and physical exhaustion is stress. Stress impairs concentration, disrupts sleep and makes us more likely to get sick.

Fortunately, we can quiet stress’s clamor with simple, focused breathing. To do it, close your eyes and concentrate on the sensation of your breath coming in and out of your body.

Continue this mindful breathing for one to two minutes. Not only will it diffuse stress, but MRI scans have shown that deep breathing quiets the white noise in the brain, improving your concentration.

10 Simple Ways to Practice Kindness Every Day
10 Daily Servings of Fruits, Veggies a Recipe for Longevity